Can a Creditor Reach My Joint Checking Account After I Die? 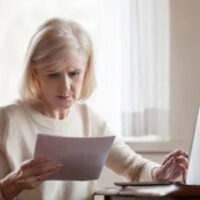 In a New York probate proceeding, the creditors of a deceased person (the decedent) have priority over any heirs. That is to say, any debts owed by the decedent must be paid before the heirs receive anything under the will. But what about non-probate property, i.e., assets that do not pass under the decedent’s will? Can the creditors reach this property as well?

A recent decision from a Manhattan federal judge helps to explain what happens in these situations. The case, TD Bank, NA v. Miller, involves a decedent who was personally liable for $3.5 million owed on two commercial mortgage loans. The decedent’s personal guaranty for these loans was executed under New Jersey law.

The decedent passed away in 2016. His widow opened a probate estate in New York. The bank holding the loans claimed the decedent still owed about $1.8 million under his guaranty. The widow disputed the bank’s calculations. She also said that in any event, the decedent’s estate was effectively insolvent, as its total debts exceeded the available assets by over $3.4 million.

The bank filed a federal lawsuit to enforce its rights under the guaranty. The judge then had to answer two questions: First, did New York or New Jersey law apply to the facts of this case. And based on the answer to the first question, how did that affect the bank’s right to reach any funds in the joint UBS accounts?

With respect to the first question, the judge said New Jersey law applied, as the guaranty itself specified that state’s rules would govern the bank’s ability to “enforce its right to payment” from the decedent. And to answer the second question, New Jersey law provides that creditors may “reach all funds in a decedent’s joint bank account that the decedent deposited in the account, or ‘owned beneficially’ until his death,” provided there were insufficient probate assets to satisfy the debt. In this case, all of the funds in the joint account were deposited from the proceeds of the decedent’s business, so notwithstanding the widow’s status as joint owner, the bank could seek repayment of the guaranty from the entire balance of the joint accounts.

Never Assume Your Assets Are Protected

Now you might be asking: How would this result differ if New York law applied? According to the judge, by default New York law assumes that the decedent only retains a 50 percent interest in a joint bank account. A creditor can only touch these funds, however, provided the decedent retained the power “to dispose of his interest during his lifetime” and the transfer of said interest to the surviving account owner would render the decedent’s estate “insolvent.” Furthermore, in exceptional cases a creditor could reach the entire account if there was “direct proof” the decedent never intended to create a joint tenancy in the first place.

The simple takeaway from all this is that you should not assume that just because you create a joint bank account with your spouse or another family member, that will protect your money from potential creditor claims after your death. An experienced Westchester County estate planning attorney can provide you with advice and guidance on the best way to protect your assets and address potential creditor issues. Contact the offices of Meyer & Spencer, P.C., today to schedule a consultation.